skip to main | skip to sidebar

During April 2008 Doorstep Collective took to the streets of central Manchester and stopped people (often easily identified by their tell-tale white headphones) listening to portable MP3 players. We asked these people the name and the artist of the track they were listening to and archived the information according to where and when people were stopped.

Reactions were mixed. Some people refused any eye contact, perhaps suspecting us of collecting for charity or suggesting they apply for a 'free' make-over, and others looked pleasantly surprised to be asked to submit something of their lives for archive.

But that was not the end for the archive. On bank holiday Monday 4th May, as part of Futuresonic, Doorstep and a small crowd of supporters took to the streets of Manchester to play the archived tracks aloud. Kitted out with a speaker-amp (kindly donated for the day from Dawson's), i-pod, the archive and maps of the city, Doorstep created the iWalk.

Participants were divided into navigators, who chose the route through the city, and soundtrack selectors, who decided what should be listened to from the archive in response to where the navigators led us.

By creating a shared soundtrack and playing it out loud to people in the city, we mixed up personal soundtracks that few people had chosen for their lives and gave them to the masses.

Thanks to all the i-walkers last month! Doorstep are currently taking some time out to plot future projects. Stay tuned for news of upcoming events!
Posted by Doorstep Collective; Lisa Beauchamp, Kate Day & Dena Bagi (Manchester based). Poppy Bowers (London based) No comments:

iWalk: A Soundtrack for a city on the move.....
Monday May 5th, starts 1.30pm at Bridgewater Hall.

Join Doorstep Collective in an attack on the iPod culture! Pick tracks from an archive of tunes from Manchester iPod users, grab a stereo, and perform the iWalk - a collective soundtrack
- on - the - move for Manchester.

Doorstep have been busy on the streets of Manchester stopping all you iPod users and collecting your tunes! Spreading ourselves around the city we've covered the city centre, building an archive of your tracks to form a collective soundtrack for the city!

We want to combat the isolationism of iPod culture by playing out a collective soundtrack of the city.......

iWalk allows you to take part in a collective performance - As we walk around the city everyday we all have a routine.... same route to work, iPod on - its just so singular! We want to unite all iPod users with the new iWalk - all you have to do is a grab a stereo and join in our march around the city!
For more info go to http://www.futuresonic.com/.
Check it out - its gonna be ace!!
Posted by Doorstep Collective; Lisa Beauchamp, Kate Day & Dena Bagi (Manchester based). Poppy Bowers (London based) No comments: 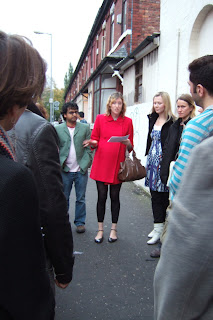 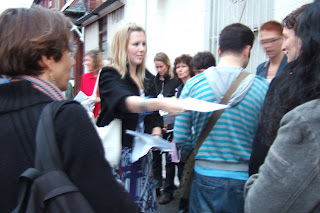 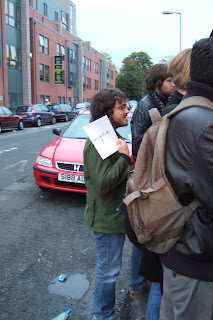 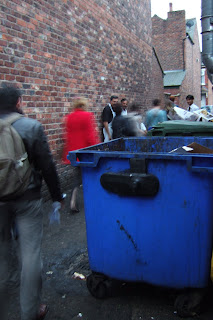 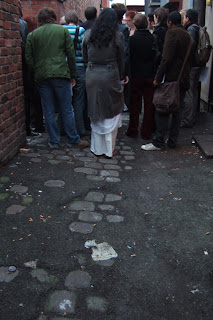 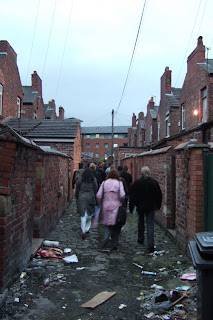 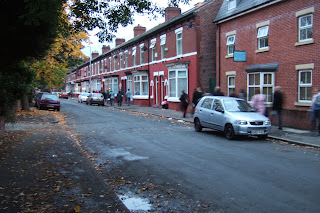 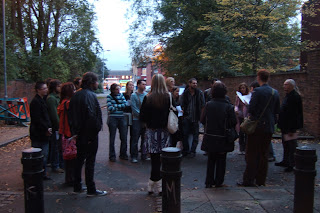 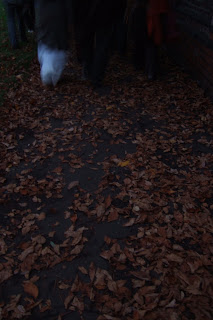 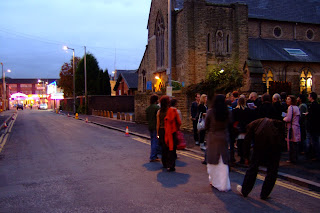 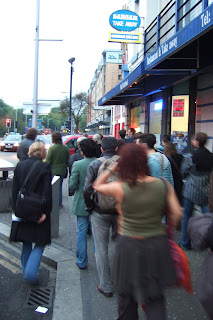 Thank you to everyone who came along and participated in the Queer Urban Walk through Rusholme, it was a great night and initiated some very interesting discussions.
The event consisted of each participant being handed an envelope. There were 3 NAVIGATOR envelopes and 18 PERSONAL STORIES envelopes (these were stories/memories previously collected from people on Canal Street and on the Curry Mile). All envelopes were mixed up and handed out to the group randomly.
The three NAVIGATOR envelopes required their recipient to lead the group through the surrounding area of the Curry Mile, naviagting thier own chosen path. The selected navigator was requested to stop three times. At each stop another member of the group would open their STORIES envelope and read out its contents.
The aim was to collate the collected memories into a continuous dialogue of voices and replay them back into different parts of the city, on this occassion Rusholme.
Rather than being a prescribed and predetermined route, we delegated the role of navigators to the unsuspecting participants with the intention that the walks became directly responsive to the surrounding urban enviroment in a way that would only happen at that time, on that day.
Posted by Doorstep Collective; Lisa Beauchamp, Kate Day & Dena Bagi (Manchester based). Poppy Bowers (London based) No comments: 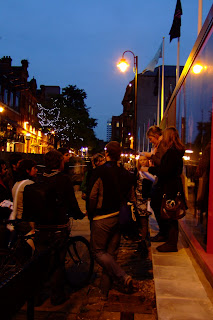 During the past few weeks Doorstep have been collecting stories and memories from the people that they've met while spending time on Canal Street. These anonymous stories were read out by participants on this Queer Urban Walk, placing the stories in new contexts and bringing new voices to the mix.

Doorstep are interested in how taking a story and moving it within the social and physical parameters of a space with a defined identity, on this occasion Canal Street and the Gay Village, can raise questions about the fixity of that place's identity and of the identities of the people that go there.

This event is part of a wider project Mixing It Up, an aesthetic and educational programme that interrogates the identities of the city of Manchester's most well trafficked neighbourhoods.
Posted by Doorstep Collective; Lisa Beauchamp, Kate Day & Dena Bagi (Manchester based). Poppy Bowers (London based) No comments:

Navigating the Manchester Art Scene - We Miss You!!

Doorstep Collective would like to say a big thank you to everyone who contributed their networks to Navigating the Manchester Art Scene!

As Navigating the Manchester Art Scene was an organically evolving exhibtion, Doorstep Collective made many additions to the network on display on the walls of Cornerhouse throughout the duration of the exhibition. These additions stemmed from the public's suggestions as posted in the contribution box in Cornerhouse cafe/bar.

The additions and changes to the network on display were documented through photography as a means of showing the organic devlopment of this exhibition. These photographs appear here on the Doorstep Collective's blogspot!
Posted by Doorstep Collective; Lisa Beauchamp, Kate Day & Dena Bagi (Manchester based). Poppy Bowers (London based) No comments: 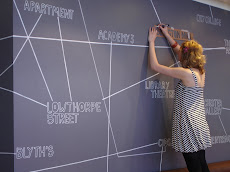 Doorstep Collective; Lisa Beauchamp, Kate Day & Dena Bagi (Manchester based). Poppy Bowers (London based)
Doorstep Collective is a Manchester-based visual and critical arts collective. Doorstep Collective was founded in 2006. After completing postgraduate courses in art history and museum studies we decided to form an arts collective that was inter-disciplinary in its approach and outcome. As a group we are focused on creating a socially engaged practice, utilising new spaces and contexts in different ways to create artworks and events that are unique in the combination of site-specificity, performance and participant interaction. Collectively we carry out a number of investigative and experimental projects promoting a more active engagement with local cultural resources. Without a fixed workspace we are able to explore some of the variables for exhibiting, such as audience and location, and take the opportunity to make the most of Manchester’s existing resources. Not wishing to label ourselves under specific categories such as ‘artist’, ‘curator’, ‘critic’ or ‘art historian’, we are developing a visual and critical process that both references those terms and interrogates them.

Queer Urban Walks 07 (stay tuned for news of more DC walks - "Art is all about the walks!" (LB)

Mixing It Up presented a series of aesthetic projects that challenge the perceived identities of some of the city of Manchester's most well known and trafficked urban spaces - Curry Mile, Canal Street, and the area that connects the two: Oxford Road. Artists question the homogeniety of urban spaces by subverting, confusing, or "mixing up" our habitual expectations of them. In turn, this mixing up shifts expectations about the people generally found in these spaces potentially transforming preconceptions about "gay", "South Asian" and other kinds of Mancunian subjects.

Artworks and visual documentation from the above selected projects featured as part of Cornerhouse Projects for a two-month duration from September 2007.